Loyal Human Barbarian. Currently rotting in an obsidian tower waiting to raise again from the dead, or maybe not.

Fregor was born in the woodlands surrounding silverymoon, he is the son of Corag Melwind a barbarian from the silver eye tribe turned lumber and Eliwa flond a merchant working in the city.
Fregor’s father originally came to the city to trade herbs and wood to the city dwellers in exchange for weapons and armour for his tribe but fell in love with one of the merchants and decided to settle down and marry her, however being a person of the wilds Corag was never really at home in the city, and barbarians are often known to the city dwellers as savage murderers and raiders and because of this he knew he would never be welcome to stay there.

thus he established a small cabin out in the woods, this way his wife could remain near the city she lived in and corag could remain in the woods where a felt most comfortable and still see his family and tribe whenever they passed by.

once they were settled they started a family, thus Fregor was born.
Fregor spent most of his childhood being raised by his father who taught him the ways of the tribe some of these teachings being how to use a weapon as well as harnassing the rage whithin his heart and mind to make him a stronger warrior.

Fregors father had taught him that this part of himself was in every creature but had taught him that the city dwellers in thier vanity and pride had ignored it in favour of the personal wealth and trinkets they always seemed to crave and beacause of this looked down on people like them considering them savage, and to that end would have little understanding of thier ways and thus was taught to keep it under control so they would not get in to trouble on the occasians where they went to visit his mother while she worked.

In addition to these teachings Fregor would also help his father out with his work in what ways he could, this work primarily involved gathering the wood his father cut up to give to the city folk which they used for firewood(apparently the city folk couldn’t be arsed to get it themselves, but as long as they paid for it Corag didn’t mind), as well as crafting support beams and doors for the house things the city folk delled in.

They also gathered healing herbs which Fregor and corag understood and sometimes different varieties of poisonous plants which Fregor and Corag could not understand (what were they going to do with those? the city folk could use it to hunt with but then wouldn’t they poison the meat?) and corag would also make woodan carvings which the city folk seemed to have an interest in and his wife sold at her shop.

Fregor and Corag both readied for a fight but Fregor being but a child was immediatly taken out of the battle as he was swatted across the face by one of it’s claws, fregor went flying through the air to land on some rocks near a babbling brook, Fregors father Corag drove the bugbear off and immediatly rushed Fregor home and while they saved his life it became apparant that permanent damage had been done.

After that his mother decided to take Fregor with her into the city to experiance city life and to get him away from the dangers of the wilds, being born to a merchant and a barbarian Fregor was a child of two worlds one of the city and one of the wild.

At his mother’s insistance Fregor would leave the wood and go with her to the city where where she taught him numbers and the way of the city although she tried to teach him words on paper his mind just couldn’t grasp the concept and since the event with the bugbear had developed a more simple minded personality.

She also decided to have him attend a school to meet other children his age within the city and not just the ones he meant whenever corags tribe mates came over, and after some persuasion got his father to agree, it was such a school he had met brailian an elf who was attending the school he went to, and despite Fregors mistrust of magic (after what his father had told him about it) the two developed a strong bond.

Fregor didn’t do very well at the school apart from the fencing lessons they had, Fregor was alaways more suited to fighting rather than the academic pursuits the others seemed to follow, although he discovered they did seem to have a healthy respect for the gods of the world as well (despite what his father had told him) and decided to focus all of his praying efforts toward tempus, Fregor feeling he had something in common with the the lord of battles.

As Fregor grew into Adulthood he began to grow more curious about what the world was like beyond silverymoon city and all so when his freind Braelian had been tasked with delivering a simple letter to a town elsewhere Fregor was more than eager to accompany him, (his father was a little disappointed he wasn’t going to be around to help out, but decided the trip might make a true warrior and man out him so he consented).

The journey went releatively simply with the only problem being a goblin ambush which with the help of the caravan Fregor and Braelian they drove off, until later on along the way as they approached a point in the road they were stopped by a group of men who were blocking the road.

Unlike your average bandits who’s demand’s are coin for lives, these men demanded that they surrender the letter to them, after refusing the man, him and his fellows set about trying to take it by force, after defeating them Fregor and Brealian killed all but one and took him as a hostage, despite threats and beatings the man refused to tell them who he was working for.

Until at some point he managed to break his bonds and managed to take a knife from Fregors belt which he had done around the time Fregor tried to intimidate the man by screaming into his face which while having the desired effect of frightening the man had droven him into a panic and rather than face the duo in combat again he pointed the blade at his throat screaming only a single word before driving the point into his flesh.

There was little the two could do, but watch as the man died in front of them, they thought on the word the man had screamed before ending his life Cyric, they learned it was the name of a god who had brought about the time of troubles into being.

That morning the two continued thier journey. 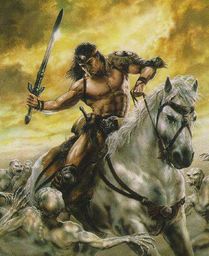